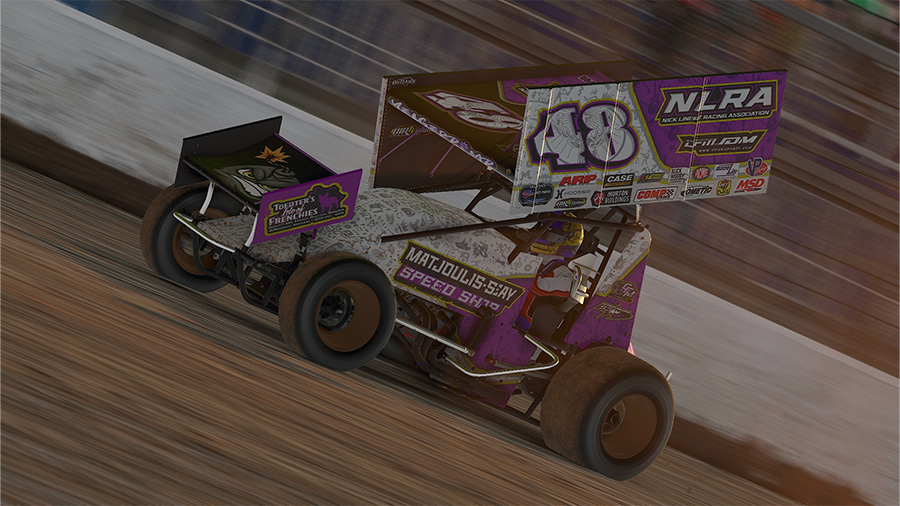 In an iRacing World of Outlaws Carquest Sprint Car Series season that has seen more than its fair share of twists and turns, Monday night’s visit to Weedsport Speedway may be one of the most consequential of all. Alex Bergeron and Timothy Smith came into the night separated by just a handful of points for the overall lead, but it was Dylan Yeager who came through to score the victory—and it’s Bergeron who will take a much more comfortable lead into next week’s finale from Charlotte.

Bryce Lucius, defending Weedsport winner Hayden Cardwell, and early-season race winners James Edens and Kenny Miller would take the heat wins, with Bergeron and Smith stuck in Cardwell’s heat towards the back after posting a pair of disappointing lap times. Bergeron would survive as the final driver to transfer from that heat, while Smith would finish sixth and go to the B-main; there, he’d finish third, losing out to Tanner Pettit and Tyler Schell for a spot in the feature and giving up any chance of regaining the points lead. Three immediate cautions would slow the start of the race, and all the heat winners but Edens would be involved—including contact between Lucius and Cardwell battling for the lead in Turn 1 that ended both of their nights early. The final caution would also see Bergeron flip out of the racetrack in Turn 3, putting him a lap down and relegating him to 14th at race’s end. But the race would stay green from there, with Edens leading most of the way. And while Yeager hit Lucius hard enough to knock out the polesitter during the second accident, he didn’t take enough damage to slow himself down, making the winning pass on Lap 25 and leading the final 11 laps. Yeager’s win allowed him to join a select group of iRacing World of Outlaws drivers who have won in both the sprint car and late model pro series.

But the drive of the night went to Schell, who helped his own chances of taking the title from Bergeron considerably. Not only did he keep Smith from transferring, but he also gained 13 spots on the night to finish seventh. That allowed him to get ahead of Smith for second in points, a manageable 23 behind Bergeron with everything left to play for in the final round. The iRacing World of Outlaws Carquest Sprint Car Series season concludes next Monday at The Dirt Track at Charlotte, where Bergeron, Schell, Smith, and Edens are all mathematically eligible for a shot at the championship. The winner will receive a trip to February’s DIRTcar Nationals at Volusia Speedway Park, where they’ll collect the $10,000 champion’s prize and official series trophy alongside serving as an honorary flagman and riding in the pace car. As always, the action streams live at 9PM ET on DIRTVision and across iRacing social media channels.