(CONCORD, NC) April 9, 2020 – Moments before the green flag dropped on the 2020 Schaeffer’s Oil Spring Fling at the Dirt Track at Charlotte, speculation fell to who would take home the $4,000 prize for taking first place in the Mississippi Thunder Speedway A-Feature event.

Announcer Tommy Rowe Jr of Riverside International Speedway offered up what he believed to be a longshot. “Nobody ever picks [Hayden] Cardwell to win,” Rowe said. “But he shows up to these big races and he walks away a winner.”
Tommy Rowe Jr. may have had the right call, but he could not have predicted how the number 7 of Hayden Cardwell would pull into victory lane for the biggest win of his life.

Cardwell would start fifth in the A-Feature, and quickly work his way up to the front of a hungry pack of 26 drivers in the A Main. The 2019 iRacing World of Outlaws Late Model Series champion Blake Matjoulis started on the pole and held the lead for the first 29 laps. Thirty laps into the A-feature Cardwell edged Matjoulis at the line with a monster run off turn four.
But the drama would not be over. Alex Bergeron was on the hunt, catfishing on the bottom while most drivers ripped the top-side of the 4/10 mile dirt track.

Though Bergeron, the 2019 iRacing World of Outlaws Sprint Car champion, started 3rd, he briefly took the lead on lap four. By lap six however, Bergeron would find himself in 25th place after contact from Austin Matthews sent him around as the drivers fought for prime real estate on the bottom.

By the halfway point in the 100-lap race, Bergeron had worked his way up to the ninth position after a long green flag run. Fifteen laps later, he had reached fourth place, and it was becoming evident he was going to get back to the front. With 25 laps remaining, Bergeron took the lead over Cardwell. After seeing how easily Bergeron was able to work back to the front, one had to wonder if Cardwell would just be fighting for second at that point.

The Tennessee driver wouldn’t go quietly, though. Cardwell and Bergeron would go on to battle closely over the next few laps, mainly single file, but occasionally trading slidejobs. For multiple laps, both cars were door to door at the flag stand. It seemed clear that the Schaeffer’s Oil Spring Fling Champion would come from one of these two drivers, if they could prevent their aggressive driving styles from becoming a liability instead of an asset.

The big chance for Cardwell came on lap 85, with only fifteen laps remaining. Bergeron had a poor restart from the lead, and Cardwell’s momentum took him into the back of the Canadian’s late model on the high side entering turn one. By the back stretch, we had a new leader and in Bergeron’s quest to get his car under control, he was passed by several more drivers as the caution flew. This would put Cardwell back in command.

The closing laps of the race saw yellow flags fly multiple times as drivers attempted to move up in the running order for an increased payday. The cautions didn’t seem to faze the #7 car of Cardwell. Cardwell’s restarts were flawless. He faced challenges from Team VLR teammates Devon Morgan and Evan Seay and the biggest questions were asked by D1RT Racing’s veteran driver Dylan Wilson.

Cardwell had all the answers, just as he had all night.

“I don’t know what to say… I’m speechless,” said an exhausted sounding Cardwell immediately following the race in his interview in victory lane. “The nerves were definitely running, that is for sure.”

After 802 total laps of competition, the dust finally settled on the virtual Dirt Track at Charlotte for the 2020 Schaeffer’s Oil Spring Fling. The richest single event payout in iRacing dirt history of $14,000 was settled. 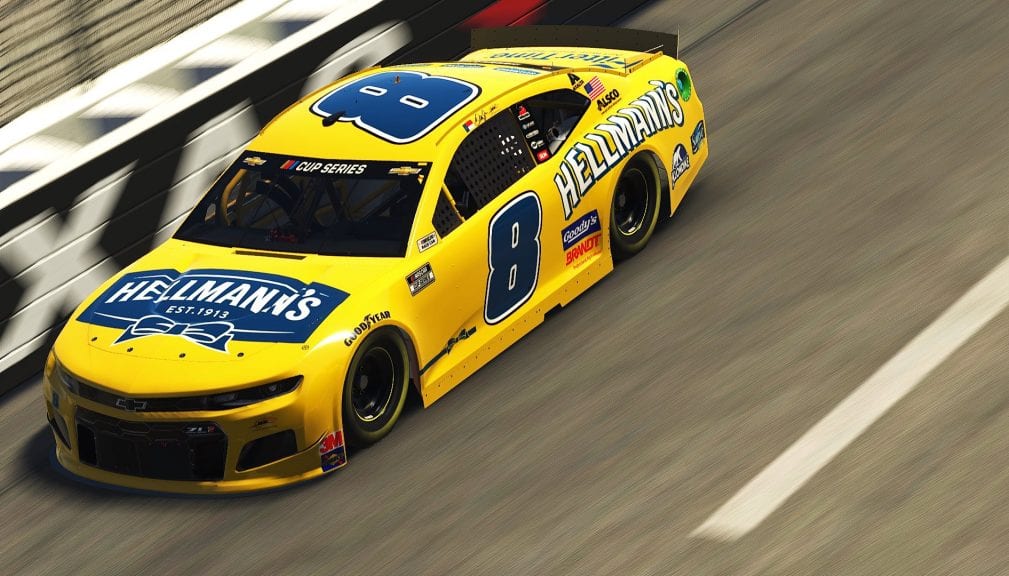